This isn’t really the idea of our blog, I don’t think either of us ever thought we’d write a post like this, but sometimes you just need to vent your anger, frustrations and upset.

This is one of those times.

As everyone knows, on Monday night, a tragic event took place in Manchester. A heartless, malice attack on innocent lives.

22 people who left their houses excited to go to a gig will never return home, and many many more have had their lives changed.

Both myself and Ashleigh are big music lovers, we’re off to an arena gig in a couple of weeks with friends, and a festival later in the year. That feeling you get as you walk in, see the staging, and hear the act playing the songs you know so well, it’s like nothing else.

We’ve both seen some of the biggest bands play arenas, and never did it cross our minds that this kind of thing could happen, yet alone at a venue so close to us.

Today, I got off the bus a stop earlier to walk the remainder of the distance to the office in the nice weather. I walked through Williamson Square, a nice open public space with a fountain in the middle. I wasn’t expecting to see the floor of the square awash with chalked messages of love, support and anguish, candles, flowers and flags of all nations, A makeshift book of memorials was in the middle for anyone to write in, should they wish. 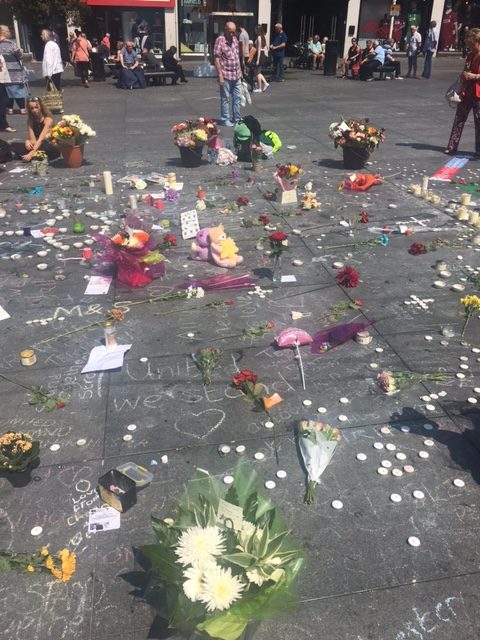 I stopped for a few minutes to take in the enormity of what had happened in Manchester, of what I was seeing and reading. I left a candle there from us, a small insignificant candle, but enough to hopefully show the suffering that we are thinking of them.

For those that don’t know, Manchester is only around 30 miles from Liverpool. Two very similar cities, and most of the time, (friendly) rivals (in the football world without a doubt). Two cities that share a diverse culture, a passionate mentality towards life, and open arms to visitors from all around the world. It’s likely that there would have been a huge number of people from Liverpool in the Manchester Arena that night, or at least, family members from Liverpudlian families.

It’s times like this that make you take a step back from daily life. Not in a “I shouldn’t go to that event because we might be attacked” – but more so a “those people were living their lives, their free, happy lives, like we should all be able to”. 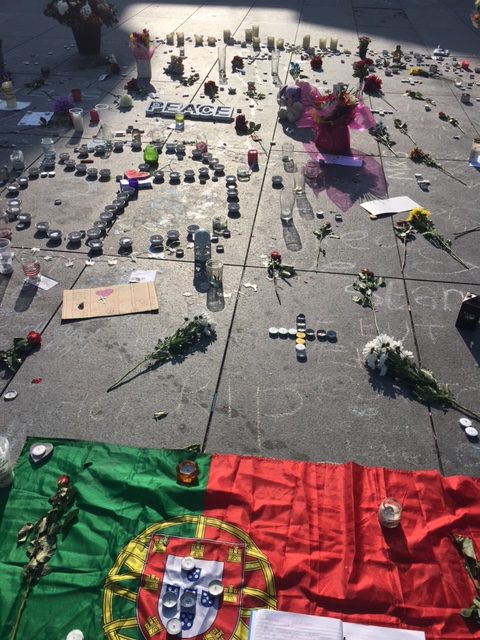 It makes me take a step back and think “fuck you” to the terrorists. To the evil minded people that can walk in to a venue full of children and blow themselves up. This isn’t just the atrocity that took place in the UK. This is for the people of the world – in Iraq, in Syria, in Africa, in America, in France, in Germany, in Russia, in Turkey, in Afghanistan.

Terrorists try and upset the lives of innocent people for unjustifiable, inhuman reasons.

The acts of the minority must not affect our view of the majority.

We will not be scared.

We will not live in fear.

We will stand together.

Manchester is a city full of music, from Oasis to Elbow, The Smiths to the The 1975. It’s a core feature of the lifestyle and character of the city. The song below is by The Doves, another Manchester band.

You turn around and life’s passed you by. You look to ones you love; To ask them why?